The Wine Research Station in Karlštejn, one of the components of the Research Institute of Plant Production, v. v. i., celebrated 95 years since its foundation. It continues the tradition of Karlštejn winemaking dating back to 1348, when Benes Krabice of Weitmile first mentioned Charles's intention to establish vineyards on the slopes below the future castle in his chronicle. The modern history of the winery began after the World War, when mother vineyards were established here to restore vineyards affected by grapevine blight. A non-vineyard village was deliberately chosen, distant from other wine districts, to serve as a quarantine station. The land of the station is now gene pool and production vineyards. The wine-growing section can produce up to 25 000 litres of wine per year. The cellar has recently been equipped with completely new technology (pneumatic press, two vinifiers, split stainless steel tanks of 300-2 000 litres, cross-flow filter). Table wines (or bourbon) are produced mainly from a mixture of varieties from the genetic resources collection (up to 270 varieties), which are grown at a rate of 15 to 20 bushes per variety. White grapes are processed using traditional techniques, blue grapes using a vinifier. The wines are aged in stainless steel tanks and bottled after about a year. The wines can be bought from the cellar, in wine shops, catering establishments in the area and at craft and pottery markets in Beroun, the Old Bohemian May Day, the Royal Parade and the Karlštejn Wine Fair, which is always held on the last weekend in September. Among the novelties, we would like to draw your attention to the wine brand Eliška in white, pink and red versions. The research station remains straddling the line between research projects and commercial winemaking. Under the new management, the vineyards should soon be renewed and new plantings of interspecific varieties (Regent, Cabernet Cortis, Hibernal, Solaris) will be made.

Opposite the PAP-OIL petrol station in Karlštejn 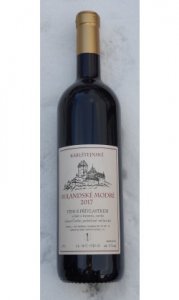 Kerner
All wines from the winemaker
Go to e-shop