The wines from Chateau Lobkowicz Roudnice are grown on unique tracks on the southern slope of Mount Sovice. The raw material is gently processed and vinified so that the terroir of our vineyards is not affected. Great emphasis is also placed on gentle handling of sulphur dioxide. Although we do not consider ourselves Autentists, most of our wines would meet their strict conditions in this respect. The siltstone bedrock and calcareous clays give the wines a unique minerality.

The winery is accessible from the side of the castle facing the Elbe River and the ČD station. 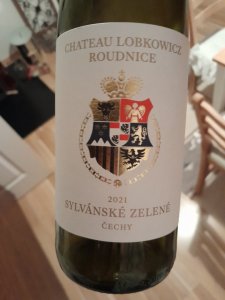 Ryzlink rýnský
All wines from the winemaker
Go to e-shop

Chateau Lobkowicz Roudnice boasts a more than 400-year tradition of wine production. Under the administration of the Lobkowicz family, wine has been produced in the originally Romanesque cellars of the Roudnice chateau without interruption since 1603. Traditional production methods, a high proportion of handwork and respect for the character of wines from the northernmost wine-growing sub-region in Bohemia have been preserved to this day. However, the history of wine production in Roudnice and the cultivation of vines on the surrounding slopes has much older roots. Vines grew already in the vicinity of the Romanesque castle, which was built on a promontory above the Elbe River by the bishops of Prague in the mid-12th century. The cultivation of vines and the production of wine continued even when the castle of Roudnice passed into secular hands. The oldest surviving economic record from 1583, when Roudnice belonged to the Rožmberks, calculates the harvest in the vineyards and the state of wine in the castle cellars. The vineyard Sovice, which is still managed by Chateau Lobkowicz Roudnice today, is also mentioned.

The sparkling wine is produced by the traditional method of fermentation in bottles aged for a minimum of 9 months in the chateau cellars. Variants of Riesling brut and Pinot Noir sec.