The Bohemian wine region belongs among the most northerly outposts of European viticulture. Prague lies on the 50th parallel, the same as Wiesbaden on the Rhein. The greatest development in this region came around the turn of the 17th century, during the reign of Emperor Rudolf II, when there were some 3,500 ha of vineyards in Bohemia. In those times most of these were in and around the city of Prague, in Mělník, Litoměřice, Most and in Louny. The initiator of this surge in activity had been the Holy Roman Emperor Charles IV, who gave it its impetus with his decrees in 1358.

The Bohemian wine region belongs among the most northerly outposts of European viticulture.

At the present time the greatest vineyard area is found around the towns of Mělník, Litoměřice and Most. The territory of this region planted with vines is not continuous but rather comprises individual suitable localities lying on protected southern slopes in lower altitudes, the majority spreading around the valleys of the four great Bohemian rivers: Vltava, Elbe, Berounka and Ohře. The greater changeability of the weather conditions in particular vintages has traditionally led Bohemia's winemakers to adopt a trend of long-term cellaring in barrels.

The Wine Region Bohemia is divided into two sub-regions: 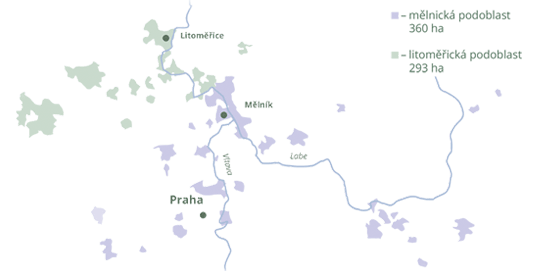